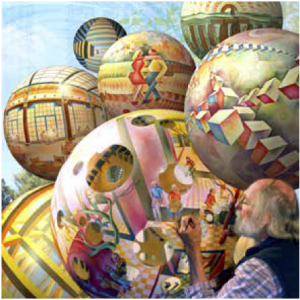 Artist Dick Termes will discuss his unique spherical paintings known as Termespheres. These suspended, rotating globes capture an inside-out view of an entire three-dimensional landscape. Termes, who acknowledges the influence of M.C. Escher and Buckminster Fuller in his work, speaks about the interconnection between math, science and art. He developed what he calls 6-point perspective in order to capture the up, down and all-around visual world from one revolving point in space. Termes’s work has been recognized and exhibited internationally. His piece “The Big Bang” was featured on the cover of the French edition of A Brief History of Time by Stephen Hawking.