UPCOMING LECTURE: Studying the Fall of the Roman Empire with the Science of the Human Past with Michael McCormick

UPCOMING LECTURE: Studying the Fall of the Roman Empire with the Science of the Human Past with Michael McCormick 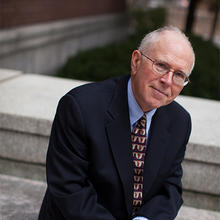 Michael McCormick is the Francis Goelet Professor of Medieval History at Harvard University, Director in Cambridge of the Max Planck – Harvard Research Center for the Archaeoscience of the Ancient Mediterranean, and the founding chair of Harvard’s Initiative for the Science of the Human Past. The Initiative brings historians and archaeologists together with other scholars and scientists to apply the tools of 21st-century science and technology to the study of the human past. From using DNA analysis to rethink migration and human health history, to the Digital Atlas of Roman and Medieval Civilization, to studying ice cores to assess human-climate interactions over two millennia, the Initiative’s cross-disciplinary work is breaking new ground. Michael McCormick has been at Harvard since 1991. Prior to that he served on the faculty in the Department of History at Johns Hopkins University.