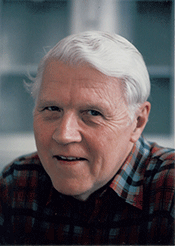 This annual lecture fund honors Donald Benson, a former ISU English Professor, who had long-term interest in the relationships among the three intellectual disciplines of literature, science and the arts.

Professor Donald Benson came to Iowa State University’s Department of English in 1958 and was Chairman of the department from 1972 to 1978. He remained teaching until 1993 and died, after struggling with Lou Gehrig’s Disease, in 1998.

Over the years he taught a wide range of courses from Freshman English through Chaucer, to British Literature of the Renaissance to Milton, on to Modern Fiction and Technical Writing. He eventually became interested in the interconnections between Literature and Science and the Visual Arts. With his colleague, Karl Guiasda, he developed and taught a two semester graduate course called “Science and Literary Imagination.” Students responded enthusiastically saying that it was the most challenging experience in their graduate work.

He began publishing with a ground breaking article on the novelist, Joseph Conrad, “Constructing an Ethereal Cosmos: Late Classical Physics and Conrad’s Lord Jim.” He prepared and published a paper entitled “The Reconstruction of Space in Kandinsky’s Aesthetics Theory,” for the very first Symposium on Literature and Science, and later for the same organization, “The Spatial Paradigm: Teaching Students to Read Literature and Science.”

The Center for Excellence in the Arts and Humanities welcomes nominations for the Donald R. Benson Memorial Lecture on Literature, Science and the Arts to be given during Spring 2019. It is requested that the public lecture embrace the relationship among the disciplines of literature, science and the arts, not merely highlight one of the three areas.

To submit a nomination for the Benson Lecture, see guidelines below. Applications are due January 14, 2020.

2016
Dick Termes: Spherical Paintings and the Art of Illusion